Following on from my blog post last Thursday, this is the next instalment to my trip to Vietnam. It should be noted that travelling at the end of June to Vietnam means that you have to battle with intense heat and humidity; the second day of the tour we were in 40 Celcius Degree heat! I recommend sunscreen, a hat and a lot of water…or just don’t visit in summer; According to the locals, the best weather is in October/November.

I actually visited the Cham Museum on Day 1 of the tour as it is located in Hải Châu District, Đà Nẵng, central Vietnam, near the Han River. This building was first built under French Rule in 1919, since then it has been expanded and now holds the world’s largest collection of Cham Sculpture. Champa was an Indian civilisation between the period 500 to 1000 AD that built and flourished in Central and South Vietnam. I was unaware that Vietnam had such a rich history, and there are many archaeological sites throughout this region. Their legacy remains through brick temples and intricate sculptures carved from sandstone, mainly of the god Shiva and Asian animals. The museum is worth visiting for those who are interested in the history of the Champa people and worth going to add further colour when visiting sites such as Mỹ Sơn (see below). Though note to all visitors, there is no air conditioning in the building so I would advise bringing a fan in the summer months to cool yourself.

Mỹ Sơn is located near the village of Duy Phú, in the administrative district of Duy Xuyên in Quảng Nam Province in Central Vietnam, 69 km southwest of Da Nang. It is a cluster of Hindu Temples in Vietnam and was considered the most sacred in the Champa culture. Located in the mountains and surrounded by lush forest, it is one of the most picturesque places I have visited. I recommend starting your visit here early in the morning before larger tour groups start their tours. The first excavations were conducted by Henri Parmentier and Charles Carpeaux (1903-04) and each cluster of buildings were artistically labelled Cluster A, B and so on. Evidence suggests that the first buildings were constructed between the 4th and 5th Century, however, currently, the oldest that remains is from the 7th Century, with the newest built in the 13th Century. Unfortunately, a lot of the buildings have been lost during the American War from bombing. Whilst you are there look out for the discarded bombshells and craters on the site.

Despite the destruction, temples, meditation rooms and even the library remain intact for visitors to observe and admire. It is a wonderful place to visit and I recommend it to be on anyone’s Vietnam itinerary. 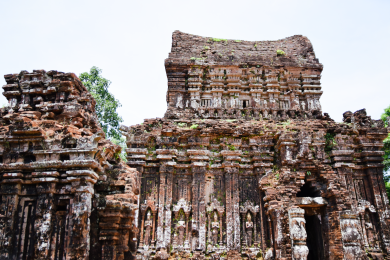 This beautifully preserved Southeast Asian trading port dating from the 15th to 19th Century and has been a UNESCO World Heritage Site since 1999. The streets are lined trees and hanging from them a kaleidoscope of lanterns. We visited during the day before the hustle and bustle of the night time markets. The main street was quiet and peaceful. In the heat of the afternoon sun, the residents sheltered in the shade playing card games and ignored us as we walked past. This allowed us time to admire the colourful historical buildings undisturbed.

The town reflects a fusion of indigenous and foreign cultures (principally Chinese and Japanese with later European influences). The Chinese influences were clear as a lot of the streets within the town reminded me of Chinese period dramas which I use to watch with my grandmother, the heavy wooden doors and intricately tiled roofs. One stop on the tour was the Old House of Tan Ky and this brought back memories of my grandmother sister’s home in China in the 90s before the growth of China reached the town. It was surprisingly nostalgic even though I was in Vietnam. The family still resides in the building and is an example of 18th merchant’s home.  Note the beautifully carved chairs as you walk into the building.

A great example of Japanese influences in Hoi An is the infamous Japanese Covered Bridge dating also back to the 18th Century. The bridge features two monkey sculptures at the entrance of the bridge, and as you cross, the other end stands two dog sculptures representing the start and beginning of when the bridge was completed. There is a Taoist temple in the middle the bridge and as you walk on the left, note the markings of the heights of the floods over the decades. 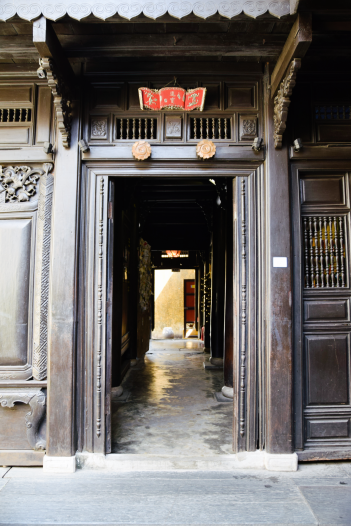 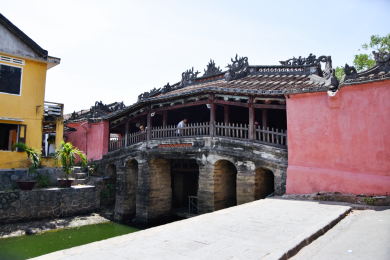 Hội An is ultimately designed for tourists, with many restaurants and shops, I would recommend shopping at the Central market but note you will have to bargain. Rule of thumb is you should deduct two-thirds of the asking price. Though note that you are supporting the local economy and people, don’t be like my mother where she was arguing £2 with the shopkeeper and making him very upset and told us to go away (I went back with the negotiated price + the disputed £2)… Located with the Central market are food stalls and juice stands. On the outer edges, towards the river, there are a lot of fresh fruit stalls and you can see the locals buying their food shopping, on the sides, there are souvenir stalls and baskets. 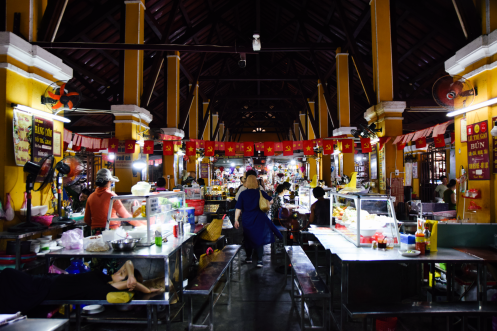 Whilst we were there, our tour guide was kind enough to ask his wife to wait in line for what he says is the best Banh Mi in Vietnam – Bánh Mì Phượng. I later found out is the one that Anthony Bourdain tried. Honestly, it is AMAZING (we ate it so quickly I didn’t get a chance to take a photo of it). It is not very large, so don’t do what I did and shared it with my sister – it is worth having one for yourself!

I wished that I was able to stay later to experience the night markets even though it has been noted it is a bit of a tourist trap. Hội An is beautiful and worth any diversion for a visit.

That is what I wanted to share with you on my trip to Vietnam, I hope you enjoyed the blog post. Have you been to Vietnam, if I go back what would you recommend? As always, I look forward to your comments!

Hi there and welcome to the Pineapple Chicken Blog!

I am Georgina Chiu, a 31-year-old British born Chinese (BBC) raised in the great city of London.

The purpose of my blog is to share my journey on how I am trying to bring positivity, wealth, and wellness to my life. Hopefully, it will inspire you to do the same.

Through my travels, passion for art & culture, and lifestyle, I am going to try to bring chilled vibes through my writing.

Thank you for stopping by. Please sit back, relax, and enjoy!

I really miss having breakfasts out with friends and family. The morning is my favourite time of the day and when I am most productive 🌅 I love those morning conversations and just makes the rest of the day more positive.
How many pictures can I put of coffee and breakfasts before you get bored of the content? However, walking down memory lane is all I can do until we are out of this lockdown in the UK!
Hey everyone! I hope you are all having a positive week :) This week I am delving into the difference between a job and work. This is one of the first video that will form part of a series covering the foundations of wealth that I am going to film and blog about over the coming year so do check it out and let me know what you think in the comment below.
I realised that I don't out many photos of myself on my IG, I guess for good reason as I am a pretty shy person but I don't think that should stop me! I want you all to know me better and if I can get a chance to know you better that will be brilliant.
Hey everyone! Happy weekend :) the sun is shining in London with blue skies so I am feeling good.
Goodness I miss travelling so much. I am trawling through my old pictures and thinking back to the days where I can sit and have breakfast to watch the world go by 🥐🥖 More importantly to sit and spent quality time with people you love.
Loading Comments...
Comment
×
%d bloggers like this: