Art: Sorolla – The Master of Light

In 1908, Sorolla was considered as one of the greatest living artists and his works has finally returned back to London a century after his exhibition at the Grafton Galleries in Mayfair. The National Gallery has curated 58 spectacular pieces of work, many of which are from private collections, spanning his whole career. It is a rare opportunity to see them all together in the beautiful Sainsbury Wing and I cannot recommend the exhibition enough!

Sorolla, The Master of Light

Sorolla was born in Valencia and his talent and determination to be an artist developed through his work retouching plates for a photographer. His talent led him to be admitted to the Academy of San Carlos in Valencia at aged 15. His further studies in master painting led him to Rome and Paris. Very early on, Sorolla’s strategy was to send large scale paintings on dark and troubling social themes to major exhibitions in Spain and abroad, where he sought and gained recognition. No subject seemed to restrict Sorolla’s paintings, he also painted his family, portraiture and landscapes, my favourite which are explored further below.

Sorolla painted a variant of impressionism, which can be considered the first distinctly modern movement in painting. Developed in Paris in the 1860s, it spread throughout Europe. The style focuses on colour and light, which Sorolla was particularly infamous for. In 1906, Sorolla exhibited for the first time at the Galerie Georges Petit in Paris, one of the main impressionist galleries. The Master of Light, interestingly, did not capture the British audience at that time but his works were particularly revered in the US. In 1908, Sorolla met philanthropist and collector Archer Milton Huntington, who made him a member of The Hispanic Society of America in New York City. This led to one of his largest commissioned works, which took 7 years to complete the 14 paintings known as Vision of Spain which adorn the walls of the gallery of the Hispanic Society.

Sorolla suffered from a stroke in 1920 which meant that he was no longer able to paint and died three years later at home with his family by his side. Unfortunately, after his death, his work went out of fashion and Impressionism was replaced by personal expression and avant-garde movements such as Dada, Surrealism and Expressionism. It is only in recent years where there have been a series of exhibitions in Spain, Germany, France and the US has reignited his popularity.

Since 1884, Sorolla had set his sights on the coveted first-class medals in Madrid’s Expoicion Nacional de Bellas Artes that was held to stimulate national artistic production and it was an opportunity for Spanish young artists to be recognised. During this tumultuous time, there was a shift in paintings of classical subjects to the dramatic changes that Spain was undergoing. Sorolla’s most famous social paintings include Another Marguerite! (1892) and Sad Inheritance (1899). My favourite paintings were And They Still Say Fish is Expensive! (1894) and Sewing the Sail (1896). Though contrasting in mood, the thoughtful depiction of emotions and light is truly captivating; the size of the paintings and the use of colour and light can only be appreciated in person. 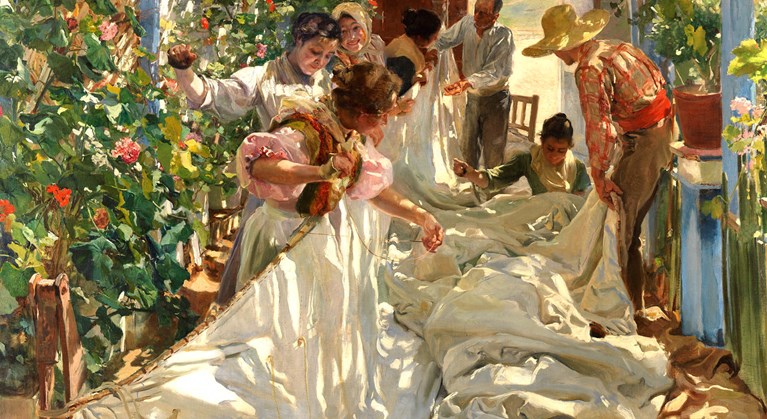 Evident through his paintings, Sorolla loved his family and the portraits of his children and his wife are some of his greatest works. Though the female model was not identified in Female Nude (1902) it has been suspected that it was wife, Clotilde. Inspired by Sorolla’s visit to London and seeing The Rokeby Venus displayed in the National Gallery, he captures the beauty of the female form and the luscious silk and lace fabric on which she laid. Other notable paintings include My Children (1904); Mother (1895-1900); Clotilde in a Black Dress (1906); Maria Painting at El Pardo (1907); and Joaquin Sorolla Garcia (1917).

Sorolla grew up by the sea and after 1900 he created a large body of work outside capturing the pleasures of families and intimate scenes of the beach. These paintings brightened the exhibition as if capturing a sliver of the sun in each and was a breath of fresh air (it was also a stark contrast to the terrible summer we are having in London). Notable pieces included Young Fisherman, Valencia (1904); Running along the Beach, Valencia (1908); The Smugglers (1919) but my favourite was After the Bath, the Pink Robe (1916).

Dynamic, vibrant and vivid; Sorolla was a true Master of Light. Obviously, this exhibition is awarded 5 out of 5 pineapples. I would love to hear your opinion of his work and whether any of you have seen any of it before? What are your favourite pieces? Have a sun-filled Sunday!

P.S. For those are interested in learning more, the curator wrote a wonderful article here.