A phenomenal pioneer of Abstract Expressionism who has been overshadowed by her more famous husband, Jackson Pollock, finally gets her time to shine. It has taken more than 50 years for her works to return to Europe in the latest exhibition at the Barbican. Lee Krasner: Living Colour presents her artwork throughout her life and provides an intimate insight into an extraordinary woman. The power of her art is evident throughout the exhibition reflecting her vivacious character. The major retrospective of her work is a rare opportunity to see some of her work all once space, in place better than the wonderful Brutalist vaults of the Barbican.

Though the exhibition was not presented chronologically ordered, I feel that her life story is the best way to showcase her art. In the below, I have selected a few of my favourite pieces from each decade to give a glimpse of the gems you will find at this exhibition.

The 1920s – Born in Brooklyn 1908, Krasner knew she would be an artist by the age of 14; which I think is amazing as I wasn’t sure of anything myself at that age. Her determination meant that she applied to the only school in New York to offer an art course for girls – Washington Irving High. One of the earliest artwork displayed was a self-portrait drawn having after graduated from Women’s Art School at Cooper Union. This small, easily overlooked, drawing is not as colourful as the others on display but what I believe to represent her changing identity, where she moved from her birth name of Lena to the more androgynous Lee.

The 1930s – The Wall Street Crash in October 1929 marked the beginning of the Great Depression. It forced Lee to leave the National Academy and enrol on a teacher’s course at the City College of New York because the tuition was free. During this time, she was completing life drawing courses with Job Goodman who focused on classical methods of drawings – think Renaissance Masters. Her life drawings were one of my favourite series of her work because of the remarkable detail captured of the human body, and the use of line and shadow.

The 1940s – This was a particularly tough time for Lee because in 1945 she moved to Springs, Long Island after her father’s death the year before, which rendered her unable to paint anything more than “grey slabs”; despite her marriage to Pollock in 1945 as well. Surrounded by nature and the change of scenery, there was a transformation in her and the “Little Images” were created. It was in 1947 when Lee created my next favourite piece where she turned two old wagon wheels from the farm into mosaic tables. Using bits of costume jewellery and any random colourful knick knacks, she created this charming piece.

The 1950s – After the “Little Images”, Lee held her first solo exhibition at the Betty Parsons Gallery in October 1951. It was the start of her large contemporary pieces, however, like many other contemporary artists at the time, the painting had failed to sell. Ripping them up (as you do) and painting black and white drawings and shredding those as well, the shreds became the beginnings of a series of collages. This technique, reworking and destroying previous works, is seen throughout her later years as an artist. It was the Summer of 1956 when she painted a series of paintings unlike any other. By this time, Pollock’s alcoholism was acute and it was on the 12 August when she received that fateful call with the news that Pollock died in a car crash killing himself, a friend of his lover and only his lover as the sole survivor. The warped pink of the flesh and abstract eye or face is a shocking contrast to her earlier work. I personally found it almost too painful to look at. 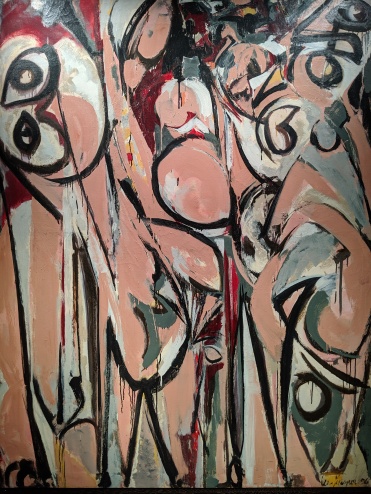 The 1960s – Lee took over Pollock’s studio after his death, she was a pragmatic woman and recognised that it was the largest space she had with natural light. This was the beginnings of her large artwork, unrestricted in space, her pieces fill the lower floor of the exhibition space. In the period when she was suffering from chronic insomnia, she worked in the dark, but because she only works with colour in the natural light, Lee opted for a restricted palette of white and umber (a dark brown). These pieces differ again from her previous style – another rebirth. It is as if she let loose to let her energy and emotions spill and rupture onto the canvas. This period of darkness was relatively short lived as by the early 1960s, colour bursts back into her paintings but Lee continues with a limited palette. She embraces her inner Matisse and nothing seemed to have held her back.

with colour one obtains an energy that seems to stem from witchcraft. – Matisse 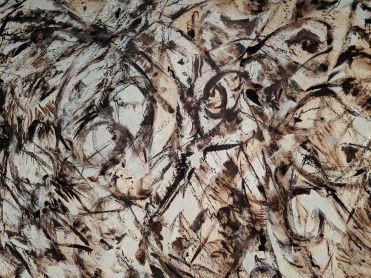 The 1970s – Another decade, another change. Lee refused to have a “signature image”, she was a formidable force that is ever evolving. The change was stark, moving away from the energetic and dynamic strokes of the 60s to the hard edge and calculated forms of the 70s. She continues to extensively use colour but in a very different way. She paints a piece entitled Palingenesis during this time, which is the Greek word for re-birth. As noted above, this been a fundamental and consistent theme throughout her decades as an artist.

Obviously, this exhibition is awarded 5 out of 5 pineapples! An exceptional exhibition for an extraordinary female artist in her own right. No longer does she need to be remembered as the wife of Jackson Pollock, but as Lee Krasner – a rebirth. As always, I would love from you and your thoughts, so leave a comment below!

Hi there and welcome to the Pineapple Chicken Blog!

I am Georgina Chiu, a 31-year-old British born Chinese (BBC) raised in the great city of London.

The purpose of my blog is to share my journey on how I am trying to bring positivity, wealth, and wellness to my life. Hopefully, it will inspire you to do the same.

Through my travels, passion for art & culture, and lifestyle, I am going to try to bring chilled vibes through my writing.

Thank you for stopping by. Please sit back, relax, and enjoy!

I hope you all had a wonderful bank holiday weekend! I finally went to @theofficialselfridges and my bought something special for myself from @gucci. Thank you @sarahcruz_ for taking this photo and also encouraging me to make my best purchases 🤣
Hey everyone it has been a while! Struggling to put photos up on the feed but hopefully you have seen updates on my stories.
I really miss having breakfasts out with friends and family. The morning is my favourite time of the day and when I am most productive 🌅 I love those morning conversations and just makes the rest of the day more positive.
How many pictures can I put of coffee and breakfasts before you get bored of the content? However, walking down memory lane is all I can do until we are out of this lockdown in the UK!
Hey everyone! I hope you are all having a positive week :) This week I am delving into the difference between a job and work. This is one of the first video that will form part of a series covering the foundations of wealth that I am going to film and blog about over the coming year so do check it out and let me know what you think in the comment below.
I realised that I don't out many photos of myself on my IG, I guess for good reason as I am a pretty shy person but I don't think that should stop me! I want you all to know me better and if I can get a chance to know you better that will be brilliant.
Loading Comments...
Comment
×
%d bloggers like this: