A Londoner's Search for Art and Positivity

Until the 9th June, Tate Modern has curated a large scale exhibition of Dorothea Tanning’s work, bringing together 100 pieces from paintings to sculptures spanning her 70-year career. The exhibition is organised by the Museo Nacional Centro de Arte Reina Sofía, Madrid in collaboration with Tate Modern and curated by Alyce Mahon and Ann Coxon.

Tanning was born in 1910 in a small town of Galesburg, Illinois, where, she said, ‘nothing happened but the wallpaper’. As a result of this boredom, she filled her time reading Gothic novels and poetry which greatly inspired her early work. Only in the 1930s did she travel to New York to pursue her artistic career, after briefly studying painting at the Chicago Academy of Art. During this time, she supported herself by being a commercial artist, including advertisements for Macy’s department store. Her first encounter of the Surrealism movement was the 1936 seminal exhibition held at the Museum of Modern Art – Fantastic Art, Dada and Surrealism. This had a profound effect on Tanning, which resulted in her travelling to France in August 1939 with letters of introduction to artists including Max Ernst and Pablo Picasso. However, when arriving in Paris, the country was at the brink of war and she had to return to New York without meeting anyone on her list.
It was only until 1942 was she reunited with Ernst, who fled from France and became a refugee in New York. The two moved in together about a week after Ernst viewed her work and persuaded his then-wife Peggy Guggenheim to include Tanning’s self-portrait, changing the exhibit entitled “30 Women” to “31 Women. In 1944 Tanning was given her first solo show by Julien Levy after being impressed by her creativity and skill in commercial illustration. Despite the success of the exhibition, the newly married couple in 1946 moved to Sedona, Arizona and settled there until 1949 where they both relocated to Paris, though continued to spend time back in Arizona. It was during this time where there was a significant shift in her style of painting, from the very dreamlike detailed paintings to abstract brushstrokes. The next few decades were a time of great experimentation from painting and sculpture, to writing and poetry.

Tanning only returned to New York in 1980 four years after Ernst died. She completed her last paintings in 1998 but continued to write focusing on poetry until she passed away at 101 years old in 2012.

Surrealism was a movement that emerged from Paris in the 1920s, with a focus to explore the complexity and hidden workings of the mind as a source of art, as well as writing. It principally grew out from the earlier Dada movement before the First World War. According to The Surrealist Manifesto published by André Breton in 1924, Surrealism was a means of reuniting conscious and unconscious realms of experience so completely that the world of dream and fantasy would be joined to the everyday rational world in “an absolute reality, a surreality.” In other words, they sought to channel the unconscious as a means to unlock the power of the imagination.

The work of Sigmund Freud was influential for Surrealists, particularly his book, The Interpretation of Dreams (1899) which legitimised the importance of dreams. This was particularly prominent in Tanning’s work where she is known to depict her dreams in great detail. Surrealist imagery is probably the most recognisable element of the movement yet difficult to define as each artist relied on their own recurring motifs. Nature is often the most frequent imagery, where Max Ernst was obsessed with birds, Dali’s work included ants and eggs, Tanning included dogs, particularly Ernst’s pet Lhasa Apso named Katchina.

“Looking at Tanning’s work is like entering into another universe,” explains the exhibition’s curator, Ann Coxon. “She is interested in everything that lies behind and beneath the facade of the everyday.”

The exhibition starts off with one of her most important works; the painting that turned 30 to 31 women and ended a marriage. Named by Ernst as “Birthday” this painting marks her birth as a surrealist. After their wedding and relocation from New York to Sedona Arizona, doors become a prominent feature in Tanning’s work. The door is a surrealist symbol and represents a portal to the unconscious. It is in this room of the exhibition, where you see the infamous painting Eine Kleine Nachtmusik (1943); though my favourite is the Self Portrait (1944) which depicts the vast empty landscape of Arizona, yet appears unsettling and claustrophobic, as if there is nowhere to run.

Having moved to Paris, her art starts to change from the intricately detailed drawings of Birthday and Eine Kleine Nachtmusik to much more abstract depictions of family, interiors and the dining table as illustrated in Portrait de Famille (1954) and The Philosophers (1952). The mid-1950s was a time of change for Tanning as her style of painting completely changed and her composition and brushwork became more abstract and fluid, and merging of bodies is depicted in Insomnies (Insomnias) (1957). Though in this room, the painting that is at odds with the others is Pour Gustave l’adoré (1974) as she uses a very rich and dark colour palette.

Tanning explored maternity during different stages of her career and her paintings are from idyllic and from my perspective, frightening. Maternity (1946-7) is the most famous of these and the soft sculpture Emma (1970) made from dirty antique lace frills makes this room particularly difficult to see or enjoy. Hidden in the corner of this room of the exhibition, is the surprising Hôtel du Pavot, Chambre 202 (1970–3) where stuffed figures are placed together into an unsettling installation, it is dark and gave me goosebumps as it brings back scenes from Stranger Things. 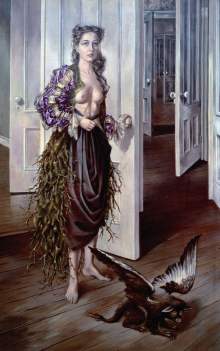 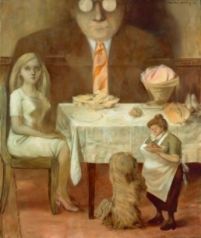 Pincushion to Serve as Fetish

Not surprisingly. like many women before and after Tanning. Her work was overshadowed by her husband’s fame. She once wrote about herself that “Her existence as an artist was dramatically compromised by her existence as Max’s wife, but love triumphs all,”.

Despite this, it cannot be disputed that Tanning was an accomplished artist who had a profound impact on the Surrealist movement, as well as subsequent generations of artists. Her exploration of the female form meant that she was often associated with the feminist movement. This included her own portraits where Tanning incorporated her gothic self-image which was cultivated from the novels she read in her childhood. Tanning also explored motherhood in detail even though she never had children herself. The works themselves were hauntingly beautiful but sad. Motherhood may have been considered but her art reflected her issues and thinking around this.

“Women artists. There is no such thing—or person. It’s just as much a contradiction in terms as ‘man artist’ or ‘elephant artist’. You may be a woman and you may be an artist; but the one is a given and the other is you.” – Dorothea Tanning

Tanning was not keen to be known as a feminist and did not want to be categorised. Despite this, she has become a role model for women trying to break free from the restrictions of womanhood to become artists and continues to influence artists today.

A hauntingly beautiful exhibition, a must see – 4.5 out of 5 pineapples.

Hi there! Welcome to the Pineapple Chicken Blog. I am a 31-year-old British born Chinese (BBC) raised in the great city of London!

The purpose of my blog is to share my journey on how I am trying to bring positivity and wellness to my life. Hopefully, it will inspire you to do the same.

Through my travels, passion for art & culture, and science, I am going to try to bring chilled vibes through my writing.

Thank you for stopping by. Please sit back, relax and, enjoy!