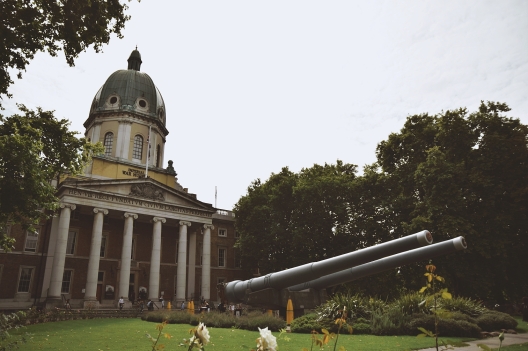 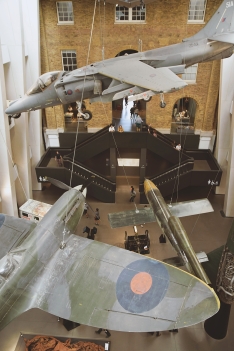 Hi Everyone! Welcome to another instalment to the Pineapple Chicken Blog. I hope all my readers in the UK enjoyed a great bank holiday weekend! I had a few adventures so I am going to split up the days into several posts so I do not inundate you with too much information :)!

First stop was the Imperial War Museum (“IMW”), the closest station being Lambeth North on the Bakerloo Line. I went to museum specifically to see the People Power: Fighting for Peace which has unfortunately closed on the 28th August. However, I thought that I would share with you what I saw and encourage you to visit the museum for all the other exhibitions.

I had never been to the museum before (despite living in London for 28 years) and was thoroughly impressed. It is housed in a beautiful building and it is amazing that it is possible to fit in a relatively small space! You walk through a beautiful park to reach the entrance where you come face to face with these two massive naval guns and ammunition shells (see photos above). If you keep walking around, you will also spot a piece of the Berlin Wall.

Once you enter the museum (please note they do bag checks), I was blown away by the sight in front of me. There were fighter jets, spitfires and other planes artistically displayed, dangling from the ceiling! The IWM is also not as crowded as other London museums making it a much more tranquil experience. You can wander the floors in your own pace and reflect in peace.

All temporary exhibitions are located on the 3rd floor, so my sister and I took the lift straight up to for People Power: Fighting for Peace. Unlike other museums, the ticket did not require us to enter at a specific time slot. The ticket was just valid from 10am (when the museum opens) and we were allowed multiple entries into the exhibition, which I must admit is the first time I have seen! (It is a very nice change!)

The exhibition explored how different peace movements influenced the perceptions of war. The main historical periods covered started with the First World War, moving to Second World War, to the Cold War and present day. It told the stories of individuals who stood up to conscription (conscientious objectors), who organised marches, and even one man’s decade long fight for peace (Brian Haw). It was a real eye opener for me because it is not an area that I had ever explored and thought much about. However, it is very relevant to all the threats that we face today, especially with the current tensions between American and North Korea.

Through all the paintings, letters, banners and even music, it gave an insight into the struggles of the anti-war protesters and gave reflection on what it must have felt like being a pacifist during a particular period. One particularly letter that stood out, was when a friend during the First World War wrote to a conscientious objector and called him a “livered cur”! Personally, I thought it was a humbling experience and wished that I went to see to the exhibition earlier to encourage you all to visit!

During my visit at the IWM, I also took an opportunity to visit a free exhibition. Sergey Ponomarev: A Lens on Syria. It is the first UK exhibition from the photographer. I highly recommend a walkthrough, especially if you love photography. The exhibition, however, is not for the faint-hearted, though the photos are not graphic (i.e. gore-y) it was heart wrenching for me to see the suffering of other individuals. There are two parts to the exhibition. First is “Assad’s Syria” which gave insight into how people lived in government controlled areas of Syria. Second, “The Exodus” covered the stories of families and individuals who sought asylum in Europe. This really hit close to home and was very humbling.

In my opinion, the IWM is a gem and often overlooked when people visit London or even living in London. I encourage everyone to stop by if they have a chance to wander through the free exhibits, if not, the temporary exhibitions. The IWM gets a well-deserved 4 starts from Pineapple Chicken!

There is also a new exhibition at the IWM, Age of Terror: Art since 9/11 which will be available until 28 May 2018. I hope to be able to go back again really soon to cover the Age of Terror and wander through the other floors.

Next up on the blog will cover my second day of the bank holiday – Richmond Park and some food reviews! Can’t wait to share with you all!

With Sweet and Sour Love,

Tickets to the exhibition cost me £5 with the Art Pass

View all posts by pineapplechickenblog

Hi there! Welcome to the Pineapple Chicken Blog. I am a 30-year-old British born Chinese (BBC) raised in the great city of London!

The purpose of my blog is to share my journey on how I am trying to bring positivity and wellness to my life. Hopefully, it will inspire you to do the same.

Through my travels, passion for art & culture, and science, I am going to try to bring chilled vibes through my writing.

Thank you for stopping by. Please sit back, relax and, enjoy!